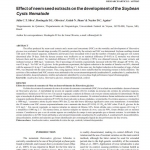 The nematode Heterodera glycines Ichinohe is currently considered to be one of the principal soybean pests found worldwide, and it causes heavy economic losses (Dias et al., 2007). It was reported in Brazil for the first time in 1991/1992 in the States of Minas Gerais, Mato Grosso and Mato Grosso do Sul, infecting about 10,000 ha of soybean crop (Mendes, 1993). Today, it has been estimated that more than 2 million ha are infested, producing estimated annual losses of about 70 million dollars (Silva & Garcia, 2004). Being a cyst nematode it has a high survival capacity and is readily disseminated, making its control difficult. Crop rotation and the use of resistant varieties are the main control methods, although the latter cannot be used for extended periods due to the high genetic variability of the nematode (Dias et al., 2007). Application of toxic nematicides is also used for its control, causing problems to human health as well as to the environment. Ecologically safe methods for its control are highly desirable.

30% OFF
ON NatureCoco WITH THE COUPON CODE:
COCONEEM23
USE COUPON NO, I DONT WANT TO SAVE